We are these beings, moving up like glow beetles on a black expanse of night. The utter insignificance of our choosing to bring ourselves to this point, at whatever speed, makes my head spin. Think of how many hours all of us have spent in our lives preparing for moments in the cold morning, shouted at by a loudspeaker; watched by the yet invisible mammoths of stone and ice that will still be here when the sun has risen above them and melted the snow and our rubber into the rocks; still here when our legs no longer work today, and in 20 years; still here when even our great grandchildren are wind and soil.

I’m here because I very much want to be. I crave this insignificance enough that I seek it out at every opportunity. I search the shared solitude that comes with finding a way to breathe my racing heart into the indifferent world, to push off of the ground that falls away behind me for hours and hours. To be able to voluntarily suffer, exist in movement on the side of a mountain, is a privilege and a need. And to end that pain is also something I search out.

Working hard at moving fast in the mountains is not more noble than any other distraction (though in my humble opinion it may be less destructive than some). Great or awful, the goings on of any life are random. Taking time every day to plan workouts, to run, to train, to stretch, to hydrate, to refuel takes many hours of effort and dedication, all of which gives me the illusion of control.  I am the boss. There must surely be some adage that says we are the makers of our destiny. I have never once believed that, but training hard certainly gives that comforting illusion.

Many events in my own life – as well as observing the world around me – have assured me quite clearly that most of what happens is simply chance, luck (good or bad). We are never deserving of what happens to us. We just exist. I know that.

So what High Trail Vanoise (HTV) reminded me was not that I am not in control: I already knew that. It showed me something about preparation. There are many details to consider, and I completely disregarded one key factor: the altitude.

I have raced three times at altitude, and two of them were some of my best performances in ultra mountain races. What I forgot, was that I was also living at altitude when I did those events. From the moment the horn went off for the start at 4am I was reminded that 2 kilometers in the air there is less available oxygen (and at 3600m there is even less).

The first kilometer I ran in the front group, but very quickly realized I was working extremely hard. I fell back to probably 35th or so as I found a rhythm. It was dark. The mountains were just a little darker than the sky. The back of my throat was too dry for the speed I was moving. After a couple of kilometers of gradual uphill, the trail kicked right up. As we turned into the first switchback, I looked behind me to see the line of over 300 headlamps marking our trail through the dark, down, down, until they disappeared around a rock.

The sun came up and we were still traipsing up a glacier at over 3000m. The obligatory spikes came in handy as the gradient was by this point much too steep to go up “sans” major slippage. My head was pounding, the air was thin, and every time someone skied by on the fresh corduroy under the sun, I asked myself politely what the fuck I was doing here. Then I remembered.

After watching the leaders on both sides of the knife-edge of control as they came barrelling down the glacier at the edge of the world, their feet sinking in past their ankles to the ice below, eventually I got my turn, and it wasn’t pretty. I fell probably four of five times on my way down that glacier, already half an hour behind the leaders at less than 15k (to give you some perspective).

Once I found some rhythm and a bit of steadier (but still very soft) knee-deep snow, I really sped up and started to catch people as I ski/ran down the ~35% slopes to the aid station in the sky, and further to the wet access road. Then I stopped catching people and began to pound the further 5 or so kms to Tignes, around the lake in the sun, past the golf course and the gawking tourists (most of them quite encouraging. There it kicked up again, and there, that rolling terrain at altitude, that terrain that truly kicks my ass. I have a hard time keeping a good rhythm on here, and the grupetto of runners just ahead of me opened a gap on me. But thanks to the long descent through a pine forest, just technical enough, I closed the gap and caught the three or four runners just before the aid station at La Daille.

The next 4km had 1000m+, what is called a vertical kilometer or “VK” and here I found a rhythm leaving the village again and could begin to pick a couple of people off (really just the ones I had caught before the aid station) , keeping my eye on them above me as the pine forest made way for the switchbacks and the infinite hot sky.

Close to the top of the VK the front of the 42k race began to catch me. Just as I watched some fall back to me, I observed them moving smoothly, becoming smaller, until they finally went over the top, again near 3000m. The middle of the race from about 30-45km is a bit of a blur. I was moving fairly well, swiping my foam-fronted trucker hat in the cold mountain streams as I ran by, and forcing myself to eat every half hour or so.

Before feeling the altitude, I thought I could legitimately do this distance and elevation gain in about 10h. As soon as I started in the thin air though, I recalculated. 11h was possible. It would be tight, but possible. And until about 45k, I was just barely on pace. But as I passed the aid station at Col de l’Iseran and started my way up to the next ridgeline, scree field, and finally knife-edged glacier, this is where the altitude hit so hard it smashed my will.

I slowed to a crawling pace. My progress was slow, my breathing was fast, and my heart was racing from the effort. The final kilometer of straight climbing before turning back toward the aid station also offered the most panoramic views. Infinite jagged peaks, sawing into the blue, leaving snow about like sawdust, white and glaring in the sun.

The descent was through steep sometimes knee deep snow with the occasional treacherous drop or boulder. I rode the line of chaos for a bit, but it is a lot of concentration, a lot of energy to do that, and at some point that mental energy flags. I was over 11h now, and I still had 10k to go.

The aid station was packed with runners going up (as I was coming down). Thinking that they were well over an hour behind me and had a heinous climb in front of them made me almost want to vomit or cry for them. The road comes up to the Col, so there were spectators watching as I slipped pathetically in a puddle and fell face first in the only patch of mud on the whole course. What’s a trail race without some mud, right!

The last 10k were a battle of attrition, one that started with a scramble and a fixed rope up a near sheer loose cliff face to a tunnel. Then, it was apparently all downhill. Except that it wasn’t. This broke my spirit again. My legs were actually ok. All the repeats I’ve been doing at my local ski hill miraculously prepared them for the alps. However, so massively past my goals and so mentally broken by the effect the altitude had had on me, I did not move down those last 8k as I should have. More snow, more up hills, and more tourist hikers as we approached the final 3k descent to the finish. There I saw someone in the distance that had passed me on the last long descent. I didn’t have the will to chase. But then out of the corner of my eye I saw someone coming up on me quite quickly. And I thought “common Liam, do this, it’s a consolation, but you can do it!” and so I ran, I flew, I fucking soared down those last few kilometers, solidly dropping the guy who had almost caught me, and catching and passing two runners in front of me as I blazed out into the ski village. I looked at my watch. It read 12h40m as I rounded the corner into the gated area to the finishing arch. One final kick through the pain. One final kick. As I crossed the finish it occurred to me that the ground was the only thing I wanted. I let myself down and panted into the dusty ground as I waited for my heart rate to come down from 180.

“You’re ok Liam, you’re ok. You suffered well.” My friend Julien (my support, chauffeur, cook, jokester, friend extraordinaire) was waiting for me. After some minutes feeling the sensation of stillness, noticing the telescopic zoom lens in my face, hearing the crowd (a crowd at an ultra!! This must be Europe!!) I got up. I laughed, joked, smiled, ate, hugged, and hobbled my way to the shower. Bliss and some solid learning. 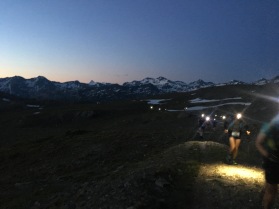